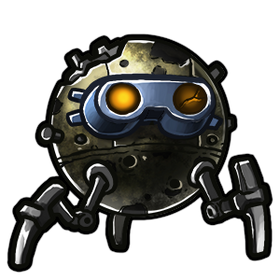 Doomed Drone is a Colorless unit. It's a

Lifespan that can be used as a cost-effective

blocker or as a means to accelerate your early economy.

Gold cheaper to purchase, however it has only a

over the course of its

Lifespan, paying for itself and giving you an extra 2

. They can be thought of as cheaper, slower, more efficient Auric Impulses. Doomed Drone are good in both high and low economy:

The power of the Doomed Drone, aside from its practical cost, is to

soak on its last or 2nd to last turn, thus giving 1

, which is very efficient. This also means rushes that can expect a counter rush should stock on them instead of Drones on the early turns, to block right after the starting defense is down.

In a game with Doomed Drones, it is still recommended that you buy enough regular Drones to sustain your economy first, then use Doomed Drones to help 'curve' out your

gold expenditures each turn efficiently when you start buying your Key units.

Health as an Engineer (and provide the same defensive granularity), but also have the option of producing gold for a while first if it turns out that you don't need defense immediately.

Venge Cannon or Cluster Bolt rush. Defends the Drones for some time.

When speed is important.