unit
(see more)
As an additional cost to buy Forcefield, consume a Drone (the Drone must be assigned).

(Fragile: does not heal)
[data page] 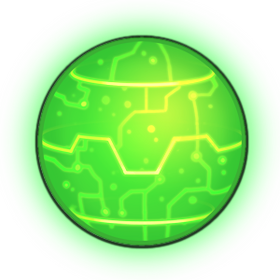 Forcefield is a Green unit and part of the base set. It's a cheap unit that consumes a Drone to increase

Forcefield is the basic drone-for-defense unit (similar to Plexo Cell). It gives you 2

for a very low up-front cost, but hurts your economy in the long term.

Many new players are too afraid to sacrifice Drones and thus undervalue Forcefields. If we assume that a Drone is worth 3 gold (it costs 3 gold), then a Forcefield is like 4

defense, which is the same defense value as a Rhino but cheaper. And they are even better than this makes them sound, because by the time you need to turn to either of those units for defense, Drones are not worth 3 gold anymore. Therefore you should turn to Forcefields for defense before Rhinos.

Another way to look at it is this: often skilled players hold back Drones to block with in the late game. If you were going to do this anyway, a Forcefield is like paying just an extra

, because this way you get to click the Drone) for an extra point of defense. That's a bargain!

Forcefield as common Prompt soak may be inefficient, but as preemptive soak with Drone, it is slightly better than Engineers, since it's 3

paid the turn before, then just 1

after, the spent Drone cut the cost by 1

When you have extra

and nothing good to do with it, Forcefield becomes even better - to the point of even being better than Wall.

defense, be careful about units reducing your base Drone count (Vivid Drone, Trinity Drone), as they might leave you with no Drone to sacrifice.

If you have excess

and no good sink for it, Drones instead of Engineers become a strong purchase for preemptive defense, as making yourself need Forcefields gives you a way to spend your

efficiently. This is essentially 3

next turn if the green wasn't useful for anything else.