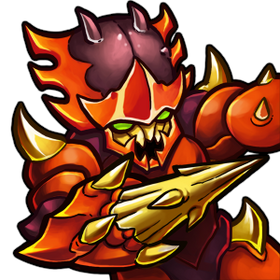 Perforator is a cheap

offensive Red unit, which can be used effectively as preventive defense. It is part of Antares.

Perforator is one of the cheapest

able to attack. Both of those properties make it a very good sink for

red that would otherwise be wasted at the end of your turn, as you can then use it either to make more Perforators or to attack with them.

Perforator is also a

2 Health blocker, which makes it as efficient as two Engineers in cost-for-health when used as preventive defense (assuming one

, which is ungenerous to Perforator as red often struggles to find a good use in the late game). It also threatens your opponent for

1, possibly forcing them to overdefend if you end up not attacking with your Perforator. This makes Perforator actually quite efficient as non-prompt defense, especially considering it's a red unit, so it only has to compete with Rhino and not Wall or Forcefield.

As a rule, Perforators should generally not be your primary attackers. They can mostly be thought of as support units. You then should rarely find yourself buying additional Animuses to power their attack. Getting 2 plus Animus is 12

, which is cheaper than Gauss Cannons, with the option to

Perforator is a good unit to use for first attackers, similar to Militia, as the attack can be skipped into buying Attackers normally, specifically Tarsiers, even blocking attack itself. This is better vs a non-red opponent, since they can't just get a Rhino to nullify the threat efficiently.

Lucina Spinos has the

ability to transform Drones into Perforators. Since the construction of Lucina will usually require you to own two Animuses, the first 4 Perforators produced are set to deal Attack to your opponent.

Units that require some Red set up gain strong support.